Nguyen The Son definitely hits the spot – Once again!

For those non Vietnamese speakers uninitiated with the consistently excellent artist commonly called The Son (Thế Sơn), he is definitely a son and also has one of his own (who stars in the photo below) and his name could be pronounced-Tay Surn. This artist has been producing excellent art for many years and in 2012 graduated with his Masters in Fine Arts, majoring in photography from CAFA in Beijing (see his impressive biography here). And its with photography that The Son has become quite internationally celebrated particularly with photo-relievo (3D photo cut assemblages as I call them) debuting in 2012 and continuing into 2015 (some of which are a side show at the present exhibition). The Son’s latest photographic phenomena has returned from a questioning group show in Sweden just in time to start a new solar new year- or as homage to the Goat soon to be passing the lunar baton to the Monkey.

At first glance you may think that his coffee tables are a digression into lacquer- just in time for a calligraphic tinted Tet…but on closer inspection you may realize the deception. (The Son’s presentation method, though, demands about as much painstaking effort as does high quality traditional lacquer) The Son has created an installation of 16 Coffee Tables with an expressed desire that this work- collectively or by sitting around an individual table- will encourage us to engage in what coffee tables in coffee houses were specifically for: discussion and argument

He has aimed to provoke comment about the relationship between two neighboring countries-traditional, historical, political, economic, cultural; in friendship, co-operation, enmity and competition and here I’ll let him do the talking (as lifted from the gallery blurb.

An intellectual Chinese scholar with an affinity for discovering the links between the Chinese culture and his own, Son has taken the historic 16 golden words that are the pillars of the diplomatic relationship between Vietnam and China that he learned as a child and reworked this connection in a humorous, ironic and probing narrative of coffee table dialogue.

The original version of the 16 golden words or characters are slogans of connecting ideology. The original phrases are friendly neighbor, comprehensive cooperation, long term stability, and future-oriented. However as time has gone by, these slogans have evolved into another version by which the tone has changed considerably. They are now joint rivers and mountains, shared ideology, cultural similarity, and correlated fate. Son has taken each of these slogans and reinterpreted them as they are experienced in modern day culture.

Each “golden word” tells the similar story of the various aspects of the life of the two countries bound by the same ideological mentality.

The 16 golden words make up four sentences, a poem of the collective commonality of the two nations.
Son Thuy Tuong Lien (mountain water together connect)

Son installs the coffee tables in 4 rows of 4 golden words that depict the shared landscape, ideals, culture and destiny of the two countries. This time The Son has not used his own considerable skills to take the photos used in the installation
On 16 squares of wood The Son has laid 16 different photographic montages (images taken from the internet) and covered them with layers of transparent acrylic. When dry he carved words into the wood, inlayed them with gold, covered the result with more layers of acrylic and then polished each square to a high gloss. 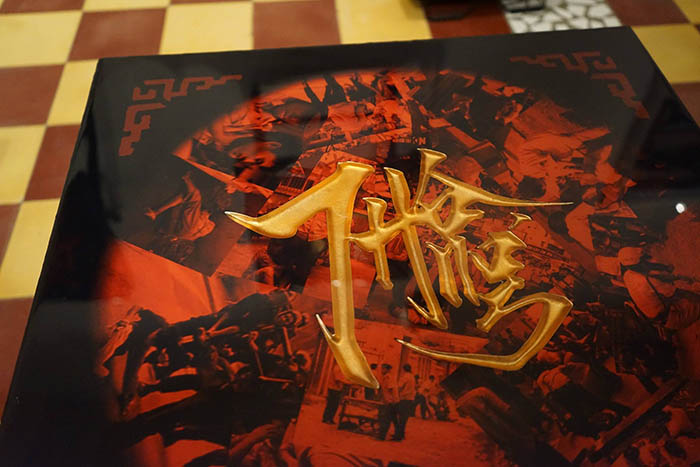 Upon closer inspection you may discern that the golden Chinese characters are also deceptive and are really stylized Quoc Ngu (modern Vietnamese script used since 1920) and, for example, the table below is carved with the word TUONG (Together) and represents architecture. In this case an iconic building in Shanghai that has similarities to a newish building, that may or may not become iconic, in Hanoi An easy table to interpret is the one about propaganda posters using a montage of photos of posters from both countries. Its golden word is also TUONG -different diacritics- and stands for ideals

Another is youth education/ (VAN-destiny) Other tables are about mountain environments ad mining (SON), the environment and pollution (LY), shared rivers and dam projects etc (THUY) while some others reflect on farmers and land; revolution and land reform; the subsidy era, social ills and evils………..

Images and inferences range from the benign to the sparky

Amazingly the coffee tables are incredibly inexpensive and could be installed as wall pieces…. ……or as functional pieces of furniture. The Son insists that they will stand up to the wear and tear of normal, household coffee table usage.

Deceive boys with toys, but men with oaths • There are some who believe in the dictate that beauty is central to the definition of art. If that be the maxim by which we judge good art then The Sons 16 Coffee Tables succeeds.

• There are others who think that good art only comes from when we have strong beliefs in aesthetics and human dignity and that this can never be separated and. In my opinion, The Son strives towards this ethic.

• Others say that if art is capable of anything in this world, it is cutting through the dross of everyday existence. Art holds up a mirror to the world so that we can see the absurdity of it. It shows us who we really are, both good and bad, as a community. Another tick!

• And a relevant statement that could apply to this installation is that art has to ask questions otherwise there is no function for it. If art is only good looking it has little purpose. If this exhibition grabs you and you wish o know more then you could meet up with gallery owner Suzanne Lecht (middle) or the artist (back view only) who speaks English as competently as I do.