Cold War, Soviet style social housing- high rise concrete apartments- is a common sight in just about all past and continuing communist planned cities from Albania through to Uzbekistan. Universal communist planning resulted in virtually identical city blocks being erected across many nations, even if there were differences in the specifics between each country.

At the L’Espace exhibition a montage of old photographs recalls what these Hanoi-an apartment blocks once resembled. Many of the apartment blocks now squat defiantly on prime land being hungrily eyed by property developers and probably by those high up who may get a substantial hand out from land sequestration. 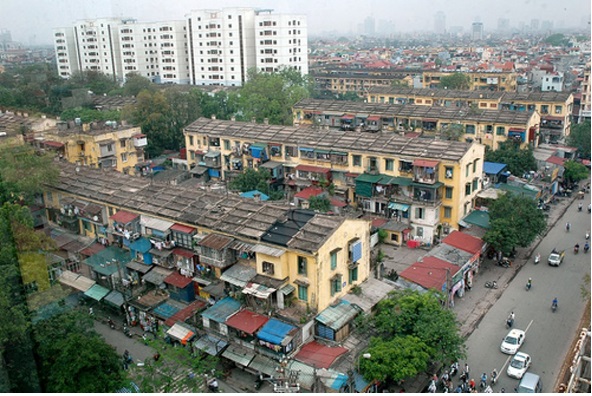 Or if they can afford it, would rather inhabit a place in the clouds in privately developed high rise apartment complexes such as at Royal City- the current apogee. But of course living in dense, urban high rise has always had its problems and as I wrote in a 2013 opinion piece about social housing in Hanoi after a viewing a brilliant exhibition in Saigon.

‘As is common when people are crowded into similar, dense urban high rise villages, the natural instinct is to carve out as much space as you can with add ons, and, as you get richer, to personalize, your spaces and by all means possible, keep control of what you consider to be rightfully yours. The artist grew up in one of these concrete blocks and , like all kids, enjoyed the communal experience, but as a kid was mainly divorced from a lot of the bickering and dissension that ebbs and flows and simmers and boils over and can make high rise village life a series of trials and tribulations. Thus these apartment dwellers turned their apartments into places that were barricaded against inquisitive, gossiping, jealous or recalcitrant neighbors, and officialdom determined to eradicate those add-ons.’

Back to the present: BACK to FRONT: The artists behind the excellent work at L’Espace – who are in the midst of a project to show Hanoi as ‘a living museum embodying archives of the past and their assimilation by the changing rhythms of the modern era’ are: Their take on Hanoi’s experiment with social housing is intriguing. They’ve titled it BACK to FRONT and Nguyen The Son has constructed a new series of his inimitable 3D photograph constructions which portray social housing as it exists today with all of its legal and illegal physical addendums.

The artist has concentrated on social housing projects that fronted streets and which, when the socialist government gradually allowed free enterprise and small private entrepreneurs to exist outside the black market, gradually became shop fronts for all sorts of business projects.
Top stories of buildings burgeoned with domestic add-ons.

Close up details of The Son’s works are deceptively illusive. Each 3D construction is accompanied by a relief architectural elevation, a 2D drawing of the elevation, and pertinent details ie: building commencement and completion by artist, by Tran Hau Yen The.

One less complex building is indicated in the sequence below 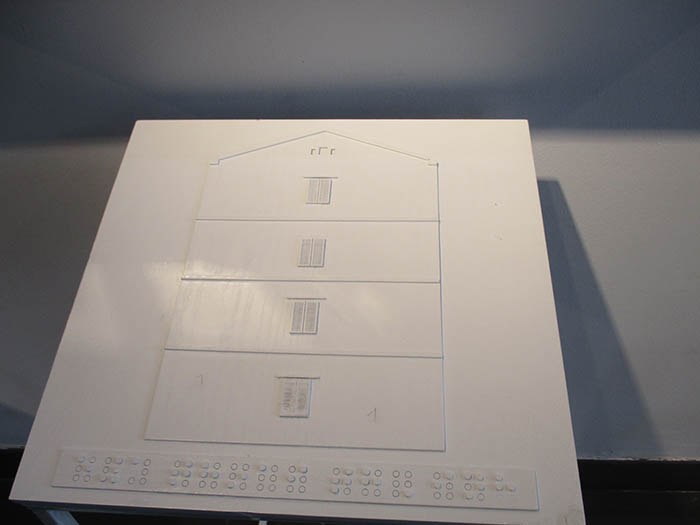 As the 3D constructions could conceivably be accessed by sight impaired audiences, the relief elevations have accompanying Braille text And an overview of the project is also in Braille script A partial overview of the exhibition below: A nice addition to the show is a lovely little painting from 1980 by Nguyen The Thien of a happy family in their new piece of paradise.